I was super pumped that this tour was even considering coming to Austin. This city has a small but great punk scene, it just doesn’t attract major punk tours like other cities. Unfortunately, there were a lot of sad punks here since the venue decided to pull out of the deal two days before. Whatever your opinion on the matter is, real life happens and everyone lost out on a fun Cinco de Mayo.

Except there was a bit of hope to be had. Let me just start out with why I love punk bands and their devoted fan base. The festival decided that if you lost out on the Austin date that the next tour date was available to ticket holders. They also upped the ante by allowing a free plus one. Did I mention that included a beer tasting as well? If this was some other major label band they would have just refunded the money or rescheduled with some public statement. And yes, there were some issues with tickets and other details. If you were able to take that sweet deal it was definitely worthwhile.

I was one of the lucky ones from Austin. Plus we got to bring some extra friends that couldn’t afford a ticket or couldn’t make the original date.

The set up was interesting and was at the Panther Island Pavillion park in Fort Worth. You get drink tickets for beer tastings from vendors which set up before the music begins. You get 10 tastings which are equal to about 2 full beers. The selection was half local and half national brewers. It was tough drinking in the hot Texas sun but it was fun hanging out the all the fans before a show. Here’s the lineup:

The first act I caught was the Mad Caddies. I have seen them previously but they are an old favorite. I was excited that they played a couple of new tracks for an album that takes punk songs and makes them ska style. They did a cover of “She” by Green Day which was very fitting for this band. I skipped The Interrupters just because they open for every Hellcat Records tour and I have seen them a thousand times. They are a good band but find them a bit redundant.

The highlight was seeing Bad Religion play Suffer front to back. That is one of the most quintessential punk albums of all time. You could literally see Fat Mike sing the entire album word for word from the side of the stage. That album cover, those lyrics, are absolute perfection every time. They also sprinkled some hits from their vast discography. I honestly have to say they are the highlight of this festival. I think Fat Mike also finds ways to book them on any tour or festival he curates since he feels the same.

NOFX is still NOFX. The small banner and they sometimes can play the songs they write. I think they have an interesting setlist these days. I think they tend to stick to newer albums rather than their hits. I do enjoy First Ditch Effort quite a bit, so this isn’t a bad thing in my opinion. This wasn’t their best set but I am glad that things are on the up and up for NOFX as far as trying new things such as this festival and camp. Here are some highlights from this date and looking forward to September.

I previously wrote this review before their comments at Punk Rock Bowling in Las Vegas. I was at the festival and will cover the subject in a future piece. Stone Brewery pulled their sponsorship and NOFX was pulled from the remaining festival dates. On their website, they also took off the postponed Austin date. 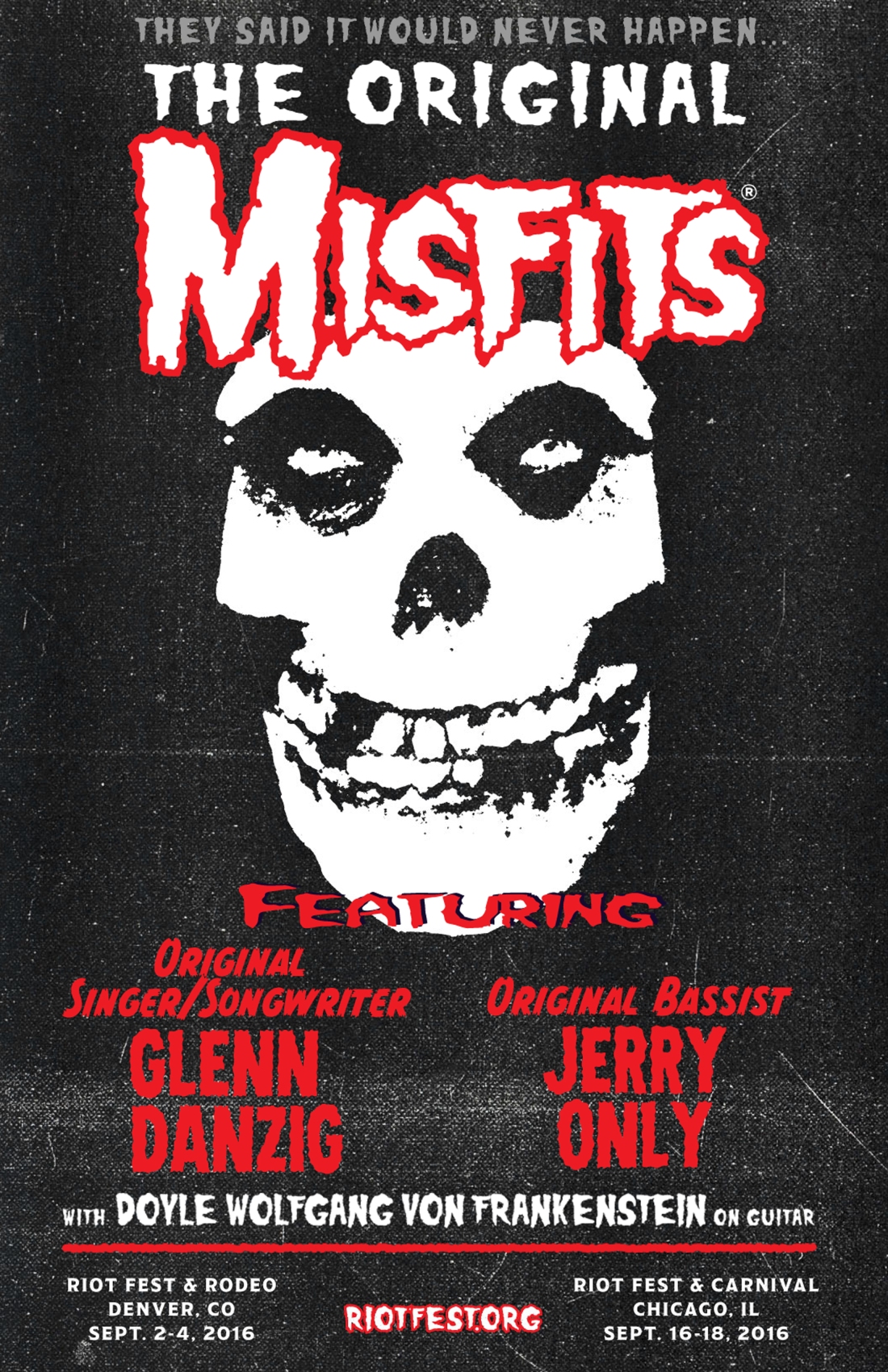 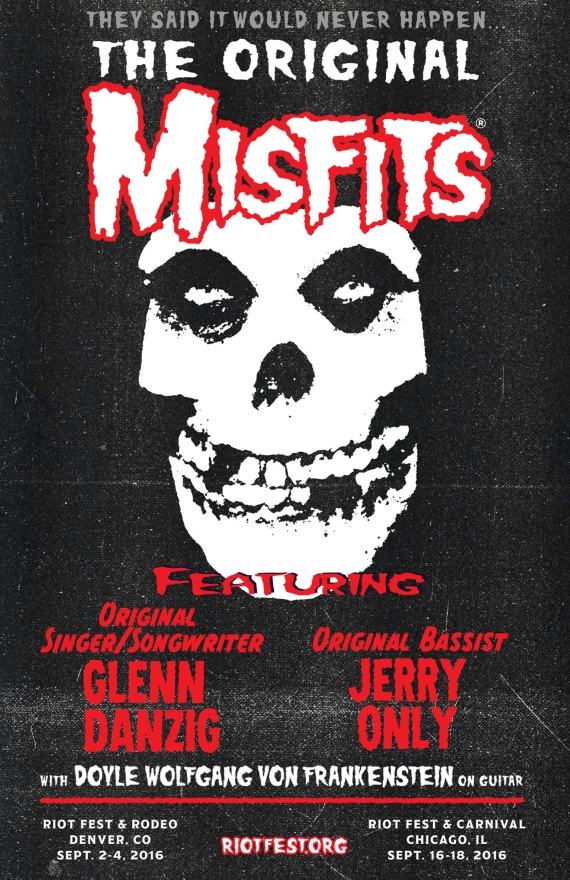 This is what dreams are made of. Before I die and my life flashes before my eyes, I will see the Misfits in that sequence. Before I get any further, let’s discuss the bands up till this historic moment in music history.

I got there a bit late on this Sunday. It’s day three. Festin’ in the sun and drinking Denver beer is hard. Regardless, I got to catch the last bit of Converge. They are pretty damn awesome. They come to Austin quite a bit and I see them usually on the Fun Fun Fun (RIP) lineup. Shout out to the guy in the crowd doing the best air drumming I have ever seen at the Converge set. Nailed it. 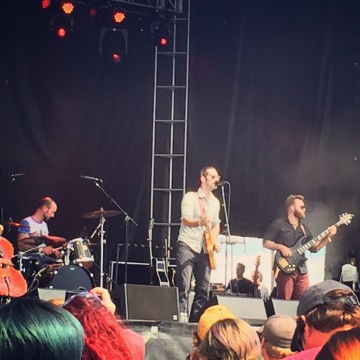 I finally got to see Murder by Death. They come to Austin a lot too. I also seem to miss them because there is a lot of musical competition in the live music capital as far as shows every night. They were better live then I expected in my head. I love their energy and musicianship. It even started to rain a bit but they kept firing away songs. I really want to see them in Denver again. They usually play at the Stanley Hotel every year. I totally get why this band would do such a crazy thing. I too enjoy the Shining. I hope that is something I can cross off my music bucket list.

The next block of bands was an interesting booking choice for Riot Fest. I don’t think I will ever see this at a festival again. They literally booked two cover bands back to back. I think they did that on purpose to see how people would react. It was pretty funny in my opinion. Chevy Metal is a fun project by Taylor Hawkins while he is not doing the Foo Fighters thing. They are said to be the “ultimate cover band” but I think I have to beg to differ. While Chevy Metal soothes my classic rock soul, they are just not Me First and the Gimme Gimmes. Me First is just so good about taking a song they love and making it their own. They have matching outfits. Their stage banter is worth the price of the ticket alone. Chevy Metal did have Spike Slawson come out and sing a song with them. It was kind of a nice musical break from the regular lineup but I am sure people that were attending Riot Fest will have plenty to say about this booking choice. 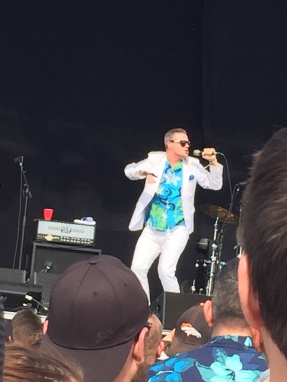 I took a meal break before Bad Religion. I needed all my nutrients for this band. It was the worst wrap I have ever eaten. The food there was mediocre at best. Seriously.

Bad Religion is everything. I don’t think they have casual fans. You are either all in or out. It was a bit rough during their set since it the sun was setting. The fans and band were sweating it out but their set was worth every ounce. They started with my personal favorite “Generator” which got me super hype for the rest of the set. The song “Stranger Than Fiction” has been speaking to me lately since I saw it live. It was also fun to see Fat Mike ambush ” 21st Century (Digital Boy)”. I get that excited when I hear a bad religion song and it is really cool to see other bands have the same reaction. Personally, I think they should have opened for the Misfits. 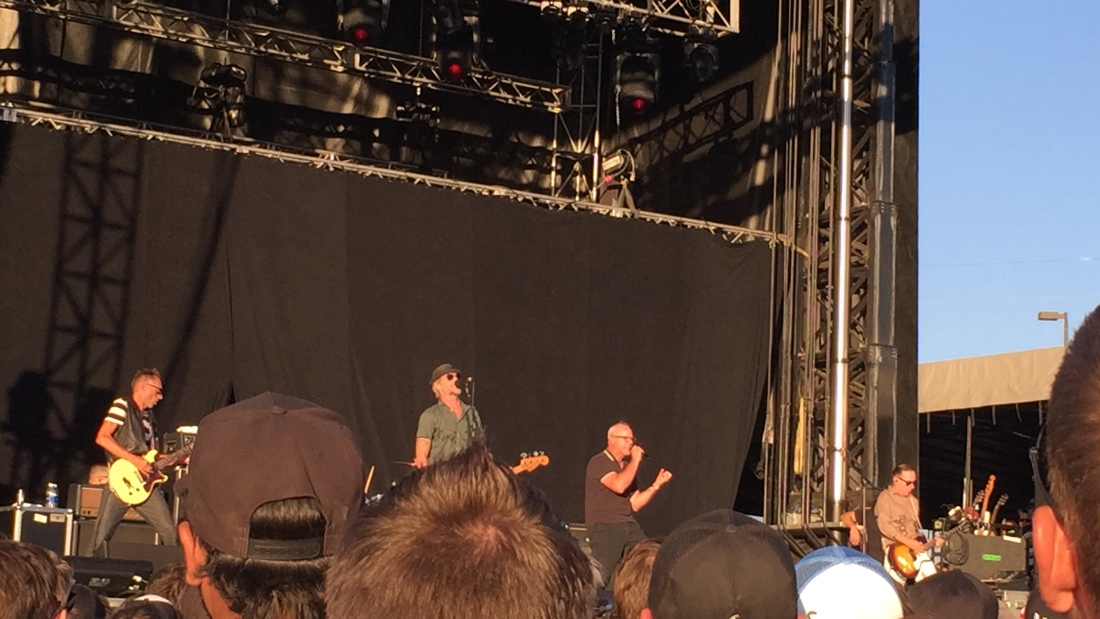 The next band was Gogol Bordello. I think they are one of the best live bands out there. When I go to a Gogol Bordello show, I don’t expect to be quiet or have my feet touch the floor the entire show. I kind of bummed that there were no country flags flying around. I think that is what makes this band very unique. They can have this all these people from all over the world, come and dance together. Plus they look like traveling gypsies and have drums. They are such a touring beast of a band. I would also like a new record from them.

At the end of the festival, I was tired. I flew several hours, had no sleep, and lived in the sun. I saw Samhain at Riot Fest a few years ago and that was pretty rad. I was starting to wonder if after all this time and energy, would I go home disappointed? Is this reunion an attempt to recapture a lost moment in time? 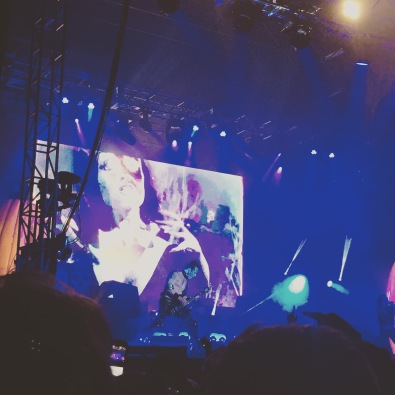 It literally one of the best shows of my life.

Let’s start with the stage. It was spooky. I expect no less. Skulls, pumpkins, devilocks, B-Movies, and Marilyn. All the things we love about the Misfits. The sound was awesome. I heard the Chicago date might have had issues, which was a fear for me. When I saw the Cure the last time I went to Riot Fest, the sound was really awful. I am sure things would have to up to this band’s high standards in order to make this reunion even happen. 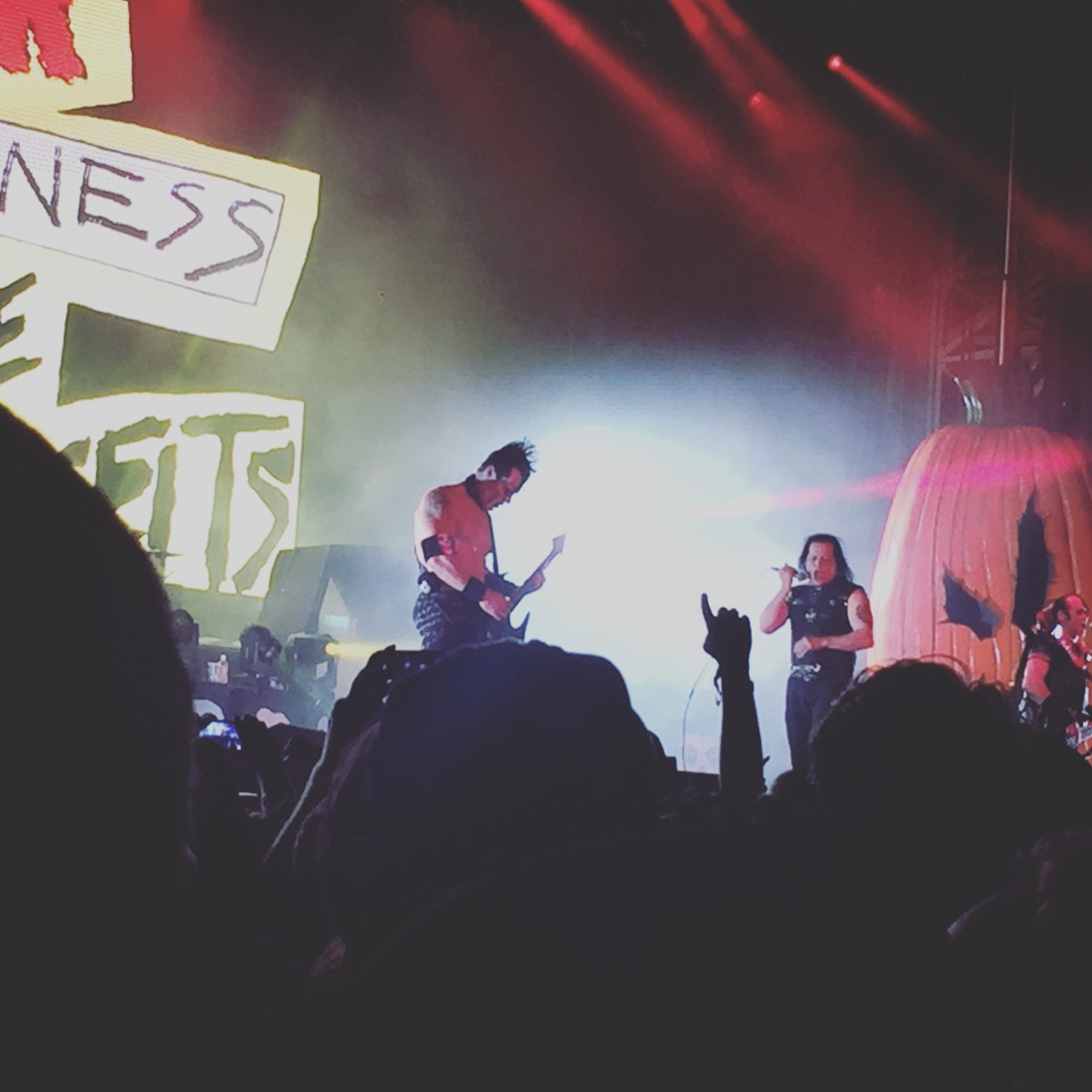 I loved how they did their set list. They did a little bit from each album. I think this was the best strategy for this reunion. When you have a long history and solid albums, this set must be carefully crafted. Here’s the whole list: 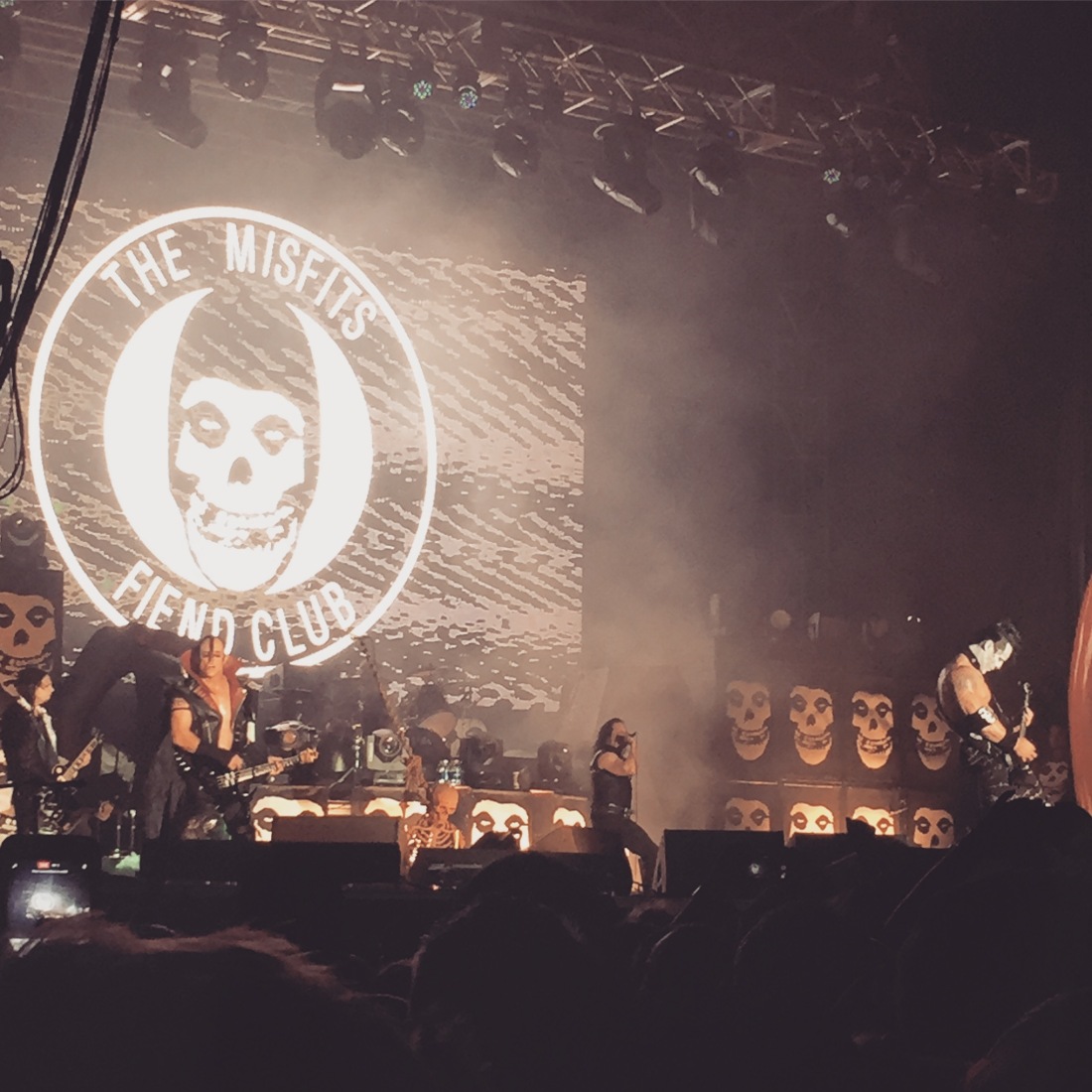 I was going to highlight what songs I lost my shit over but there was way too many. I know I have sung “Skulls” a thousand times over. Usually at a local punk show. This time was so gratifying. The stage changed with every song and album. I loved how they still looked like the ideal of the Misfits. I mean it is hard to take a B movie sci-fi look serious. I honestly loved it. I feel Jerry Only, Doyle, and Dave Lombardo played the part. I felt like nothing had changed since 1977. Danzig did his class leather. I was curious to what angle he was gonna go. He is known for taking himself and his craft too seriously. I was also curious as to how his voice would adapt back to the Misfits’ sound. I have seen him sing in Samhain and Danzig. They are different than the smooth 50’s style voices of the Misfits. Not far off but different none the less. His voice was flawless and didn’t miss a beat. The guitars were buzzy and full of that classic Misfits’ tone. I actually saw Danzig smile and he just laid everything he had out on the table. 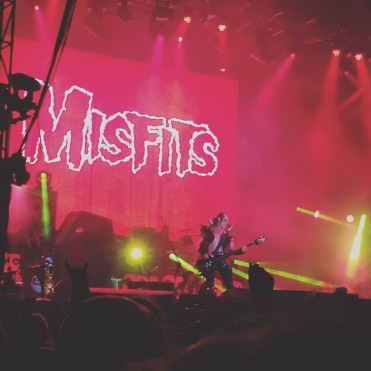 I usually come back from a show and I could at least name one thing that could have been better. I was absolutely speechless. I have talked to several fans and have read countless articles about this reunion. Most people can agree this was an amazing reunion. We thought it would never happen and might have been overdue. People were joking that The Smiths and Fugazi/Minor Threat are the only ones left to reunite. All I can really say about this reunion and festival is that I am a super lucky girl that got to be part of an important moment in punk music history. Here’s hoping for more music from the Misfits and a tour. If you believe the rumors.

*Apologies for the tall video, I am 5’3. The struggle is real at shows*