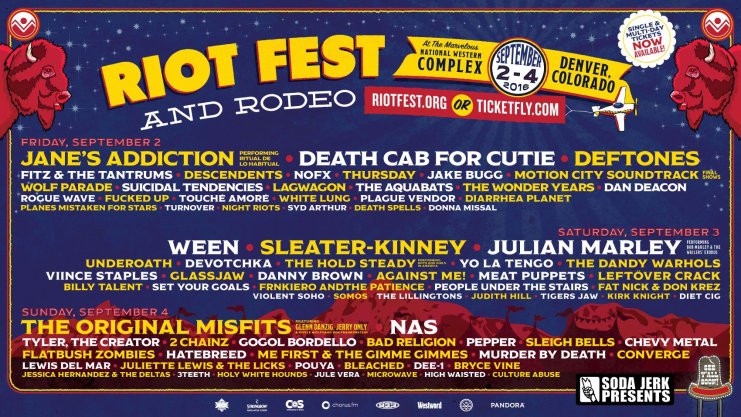 It is said that “Riot Fest Sucks” (at least that’s what they want you think). I think setting the bar really low on expectations takes the edge off when it comes to impressing your audience. When it comes to Riot Fest, this festival has done such great lineups the past few years I am officially a repeat customer. I went to Chicago two years ago and this time I went to Denver. The Denver Riot Fest is almost a literal rodeo. Being from Texas, I understand this setting. It is almost too familiar. The festival set up was part rodeo, part Warped Tour parking lot.

Since I got there a bit late, I went straight to see my favorite fest band: Fucked Up. I think I love this band even more as they progress into their albums. I also enjoy Damian’s podcast.They played a short set but did not disappoint. They played classics like “Crooked Head” and  “Black Albino Bones”. I learned that “Black Albino Bones” is about record collecting and I am going to revisit that song. I think Fucked Up is really well thought out music but doesn’t take itself that serious either. The highlight of their live show was when Damian carried out armfuls of water for the audience and was still screaming into the mic.

I spent the rest of the fest in the literal rodeo ring. I got to see the Aquabats! I love that they are live action super heroes of sorts. I  have enjoyed their shows and have been a fan for years. Their fan base is literally little kids and way too old adults. But we are all on the same page here. We love to party and fight villains. Their stage show was the best in the sense that 1.) their songs are catchy 2.) they had dancing sharks like Katy Perry super bowl style 3.) they had inflatable pizza slices to crowd surf on: Surf’s UP!

My favorite highlight of the Aquabats set was when MC Bat Commander taught children to circle pit, literally. Yes they literally just ran in a circle but this will be an important concept they will learn later down the line. The children are our future after all. They also had some funny musical jokes where they would play parts of other people’s song you wouldn’t think the Aquabats would know. They are a lot more hip than you think for guys dressed in costumes.

The rest of the festival was a perfect trifecta of Fat Wreck Chords bands: Lagwagon, NOFX, and Descendents.Lagwagon is still one of favorites. They play each song with such precision and heart. I love their last album Hang a lot and was stoked to hear “Cog in the Machine” again live. They played their classics such as “Violins” and “Making Friends”. The only thing about big festivals is that you only get mostly classics from a band like Lagwagon but each one of theirs is a gem.

I was anticipating the NOFX set. The band has had a crazy year. They wrote a book. They did a tour. Fat Mike did a detox. I feel like this show would be a bit of a regroup for this band. Once NOFX took stage that rodeo arena was packed to brim with punk fans. I had to watch from the seats since the arena was getting too full. That’s great for NOFX though. I feel they did a great set and played newish songs such as “72 Hookers” and “I Believe in Goddess”. They debuted “Six Years on Dope” from their new album First Ditch Effort coming out in October. I am digging their new release so it was cool to get a preview. Their set was mediocre but I kind of want that from a NOFX. I only come to this conclusion from other NOFX fans at Riot Fest. I eavesdropped on a lot of conversations that either loved the set or thought it wasn’t their best. NOFX is not about perfection but they still know how to entertain.

The Descendents are one of my top ten favorite bands. I don’t think I could give them a bad review since I am super bias on the subject. I will say that I loved seeing them at Riot Fest Chicago two-year ago because they did Milo Goes to College front to back and that was a real musical moment. I was also excited to hear their new release Hypercaffium Spazzinate live for the first time. I believe their new album holds up live. They played a very good mix of all their albums and I can’t wait to see them in my hometown for Sound on Sound festival in November.

I also got to check out the half of the Deftones set. I still sweat that band a lot and I am not ashamed. By the end of the night I was all rodeo-ed out.

I am a Digital Media Major at St. Edward's University. I live in Austin, TX and I go to a lot of shows. View all posts by Punk Rock Anthropology